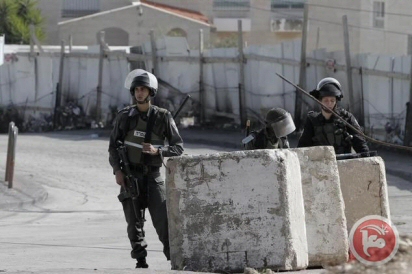 Clashes broke out Wednesday morning, in occupied East Jerusalem, during a commemoration of two Palestinians who were killed after carrying out a deadly attack on a Jerusalem synagogue last year, witnesses said.Witnesses told Ma’an that Palestinian youth marched from the center of Jabal al-Mukabbir towards the main neighborhood entrance that Israeli authorities sealed with cement blocks, last month.

As demonstrators approached the blocks, witnesses said that Israeli forces stationed at the entrance launched tear-gas bombs and stun grenades before firing live ammunition at the group.

Wednesday’s demonstration took place on the year anniversary of the deaths of neighborhood residents Uday and Ghassan Abu Jamal who were shot dead after attacking worshipers in a synagogue in West Jerusalem with guns and axes.

The attack immediately killed four, a police officer later succumbed to his wounds, and another Israeli died last month after being hospitalized since the attack, bringing the death toll to six.

The family home of Ghassan Abu Jamal was demolished last month, damaging several nearby homes in the neighborhood.

A week following the demolition, Ghassan’s cousin Alaa drove his car into a group of Israelis at a Jerusalem light rail station before getting out of the vehicle and killing an Israeli man with a meat cleaver.

The Abu Jamal home is one of several to be demolished since Israeli PM Benjamin Netanyahu called for a new process to legally expedite punitive home demolitions.

Israeli authorities say the policy is intended to deter future attacks but rights groups say the measure is ineffective and illegal under international law.

Israeli authorities last week issued a demolition order in Jabal al-Mukkabir for the home of Bahaa Elayyan, 22, who was shot dead during an attack on Oct. 13 that killed one Israeli on scene.