Army Abducts A Father And His Son In Hebron 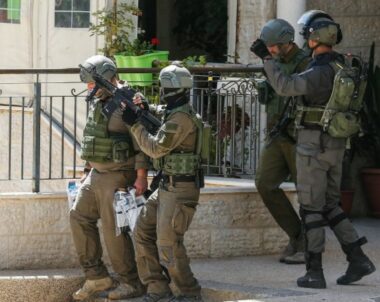 Israeli soldiers abducted, on Wednesday at dawn, a Palestinian father and his son in Yatta town, south of Hebron, in the southern part of the occupied West Bank.

Media sources said several army jeeps invaded the town before the soldiers stormed and searched the homes of Azzam Khalil Shehada, and abducted him along with his son, Thaer.

They added that the soldiers also installed roadblocks at the entrance of Sa’ir and Halhoul towns, northeast and north of Hebron, in addition to Hebron’s northern and southern roads, before stopping and searching dozens of cars, and interrogated the Palestinians while inspecting their ID cards.

Also at dawn, the army abducted three Palestinians when dozens of soldiers invaded many areas in Ramallah governorate, in the central West Bank, before breaking into homes and searching them