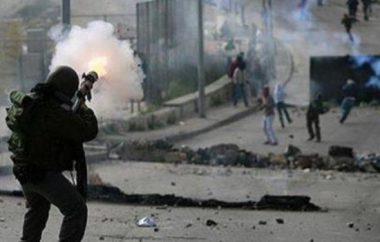 Israeli soldiers invaded, on Tuesday morning, the Schools Area in Hebron city, in the southern part of the occupied West Bank, leading to protests before the army fired rubber-coated steel bullets, gas bombs and concussion grenades, causing many to suffer the effects of teargas inhalation.

Medical sources in Hebron said the soldiers fired gas bombs at the students, and many surrounding buildings, especially near Tareq Bin Ziad School, and Hebron Elementary School, in the southern area of the city.

They added that many Palestinians suffered the effects of teargas inhalation, and received the needed treatment.

On Monday, the soldiers killed a young Palestinian man, identified as Wael Abdul-Fattah al-Ja’bari, 27, near the al-Mowahel military checkpoint, located near the illegal Israeli settlement of Keryat Arba in Hebron, in the southern part of the occupied West Bank.

The army claimed the man attempted to carry out a stabbing attack against the soldiers at the checkpoint, before he was shot.