Freedom Flotilla to Depart Gaza as Another Sets Sail from Copenhagen 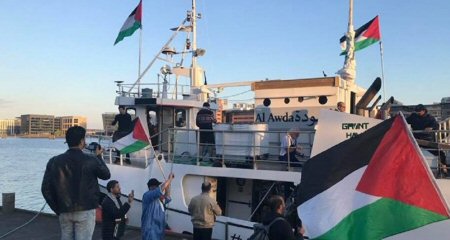 The National Higher Committee for the Great Return March (NHCGRM) announced, yesterday, that a flotilla of ships is going to depart the Gaza Strip, in breaking the siege imposed by Israeli occupation forces for over eleven years, which led to a dire and unlivable situation in the coastal enclave.

In a press conference held at the out-of-action Gaza seaport, Dr. Salah Abdulati, member of the NHCGRM, said, “The ]Israeli[ siege over the Gaza Strip is an abhorrent and crystal-clear violation to the humanitarian international law, and is up to a crime against humanity; it constitutes collective punishment prohibited under all international treaties.”

“So, we have decided in the National Committee to announce the inauguration of the first voyage setting sail from Gaza and moving around the world,” he added., according to Days of Palestine.

The organizers did not mention any details about their initiative or whereabouts of the journey will stop, but indicated that they will kick off within few days.

They also set up a registration point, at the Gaza seaport, to prepare lists of patients and wounded persons before heading outside the Strip, as an attempt to break the naval blockade.

Earlier this month, three vessels with Freedom Flotilla Coalition (FFC) set sail from Copenhagen on their way to the beleaguered coastal region, in an effort to break the Israeli blockade, as well.

As they will stop at several seaports in Europe to pick up demonstrators in support of the Great Return March, the ships are expected to arrive on the Gaza shores within two months, loaded with humanitarian aids and medical supplies.

Israeli occupation forces have violently seized control over humanitarian aid vessels, preventing them from sailing in or out of Gaza. But, the most horrific interception was in 2010, when the occupation forces killed nine Turkish activists on board the Mavi Marmara, and commandeered the vessel by force.