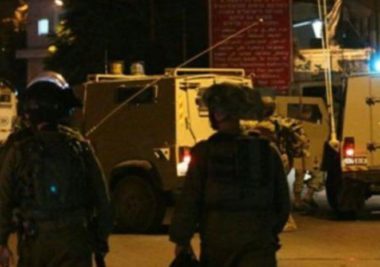 Dozens of Israeli soldiers invaded, earlier Wednesday, Shweika area, north of the northern West Bank city of Tulkarem, and abducted a man after interrogating him and his family.

Eyewitnesses said the soldiers invaded and ransacked the home of Waleed Suleiman Na’alwa, 59, and interrogated him and his family, before abducting him.

Waleed is the father of Ashraf Na’alwa, who fatally shot two Israeli settlers, and wounded a third, in the Industrial Zone of Barkan colony, on October 7th, 2018;  the army is still looking for Na’alwa.

Since the shooting, the soldiers have been continuously invading and searching the homes of his family, and abducted many of them.

A month ago, the soldiers abducted Waleed’s older son, Amjad Na’alwa, 32, who is scheduled to appear in court today.

Waleed’s wife, Wafa’ Mahmoud Mahdawi, 53, and his daughter, Fairouz, 33, who teaches at Birzeit University, near Ramallah, are still imprisoned and are scheduled to appear in court, Thursday.

Last month, the and handed Ashraf’s parents, an official order for the demolition of their home.

Army Abducts Five Palestinians, Including A Legislator, Injures Several Others, In West Bank