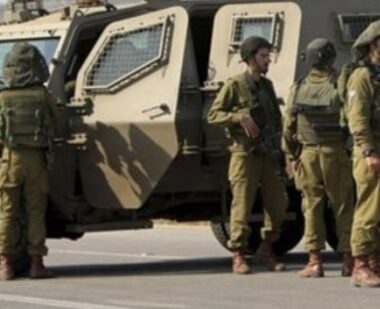 They added that the soldiers abducted a former political prisoner, identified as Aseed Nasser az-Zeer, 23, from his home in the al-Jabal neighborhood.

Furthermore, the soldiers abducted Mohammad Mousa Abbassi, from the Shayyah neighborhood in Silwan town, while he was in the courtyards of the Al-Aqsa Mosque.

It is worth mentioning that the Israeli police also installed a roadblock in the Bab al-Magharba area, in Silwan.

Furthermore, the soldiers abducted a young Palestinian man from his home near Hebron, in the southern part of the occupied West Bank.

In related news, a group of fanatic Israeli colonizers, illegally squatting on stolen Palestinian lands, attacked late on Wednesday at night, many parked Palestinian cars in the Old City of Hebron, causing damage, in addition to attacking several homes.

In addition, the soldiers injured more than 100 Palestinians at the junctions of Beita and Huwwara towns, near the northern West Bank city of Nablus, after the army attacked protesters who marched in solidarity with the Palestinian detainees.