Soldiers Abduct A Palestinian Near Hebron 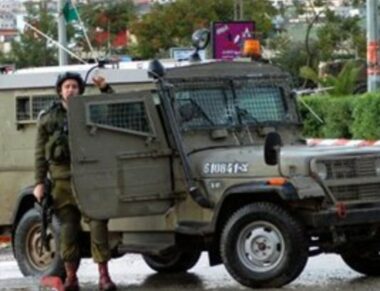 Israeli soldiers abducted, Thursday, a young Palestinian man from his home near Hebron, in the southern part of the occupied West Bank.

They added that the soldiers abducted a young man, identified as Abdul-Rahim Darabee,’ and took him to an unknown destination.

The soldiers also installed roadblocks in various parts of the Hebron governorate, before stopping and searching cars, and interrogated many Palestinians while inspecting their ID cards.

In related news, a group of fanatic Israeli colonizers, illegally squatting on stolen Palestinian lands, attacked late on Wednesday at night, many parked Palestinian cars in the Old City of Hebron, causing damage, in addition to attacking several homes.