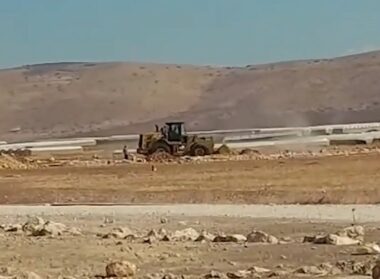 The Atouf Village Council said the Israeli military bulldozers destroyed a three-kilometer road, used by the farmers to reach their lands.

He added that the road was funded and supervised by the Palestinian Agricultural Relief, to help the dozens of farmers in the area.

In addition, the soldiers invaded a land, owned by Rami Srour Bani Odah, and demolished his agricultural room.

In related news, the soldiers demolished an agricultural room on Palestinian land in Deir Ballout town, west of Salfit, in central West Bank.

Also, the army uprooted dozens of Palestinian olive trees in Bardala village, in the Northern Plains of the occupied West Bank.

Also, the soldiers shot and injured, on Monday at dawn, three Palestinians and abducted one, in Tammoun town, south of Tubas city, in northeastern West Bank.