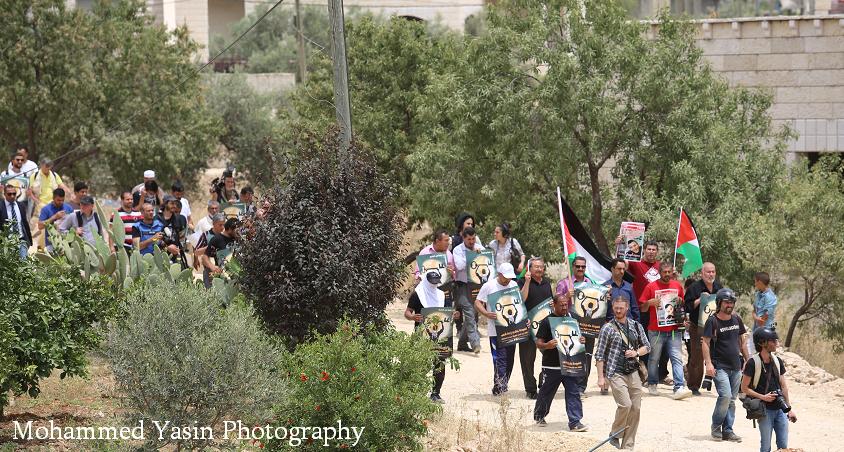 Israeli soldiers attacked, Friday, the weekly nonviolent protest against the Annexation Wall and colonies, in Bil’in village west of the central West Bank city of Ramallah, kidnapped a senior nonviolent Palestinian activist and an Israeli activist, and injured dozens. This week’s protest marks the 68th anniversary of the Nakba, and including a cycling race. The Popular Committee against the Wall and Settlements in Bil’in said the soldiers assaulted its coordinator Abdullah Abu Rahma, causing various cuts and bruises, and kidnapped him, in addition to kidnapping an Israeli solidarity activist, also after attacking her.

The Committee added that the soldiers fired rubber-coated steel bullets, long-range gas bombs, and concussion grenades at the protesters, just as they approached the old site of the Annexation Wall, and chased them in the olive orchards.

Resident Bassem Yassin, member of Bil’in’s village council was shot with a gas bomb in his arm, while dozens of local residents and Israeli and international peace activists suffered the effects of tear gas inhalation.

The Israeli gas bombs and concussion grenades also caused fires in olive orchards, and damage near the homes of Mahmoud Abdul-Hadi Samara and Mohammad Hashem Bornat, west of the village.

It is worth mentioning that Dr. Ahmad al-Majdalani, member of the Executive Committee of the Palestine Liberation Organization (PLO), Dr. Ramzi Abu Rabah, member of the Political Bureau of the Democratic Front for the Liberation of Palestine (DFLP), Essam Bakr, coordinator of the National and Islamic Committee, and various other political and social figures participated in the protest.

The protesters carried Palestinian flags, and signs affirming the legitimate Palestinian Right of Return, liberation and independence, and chanted for the release of all detainees, and the removal of the Israeli settlers and their illegal colonies.

Today’s protest marks the sixty-eighth anniversary of the Nakba, when Israel was established in the historic land of Palestine through the forcible removal hundreds of thousands of Palestinians, massacres, and the complete destruction of hundreds of villagers and towns.

The soldiers also invaded the Palestinian lands and assaulted many people, causing cuts and bruises. The Popular Committee said more than 100 people participated in the cycling race, including protest leader Abdullah Abu Rahma, who was kidnapped by the army.

It is worth mentioning that, despite the Israeli military assaults, the cyclers continued their friendly race.

Dr. a-Majdalani, and the head of the Popular Committee against the Wall, Engineer Waleed Assaf, and various committee members delivered the prizes to the winners; Mohammad al-‘Askari from Tulkarem, won the first place, while Wajdi ar-Ra’ey and Dia Shabaro, both from Nablus, came in the second and third places.