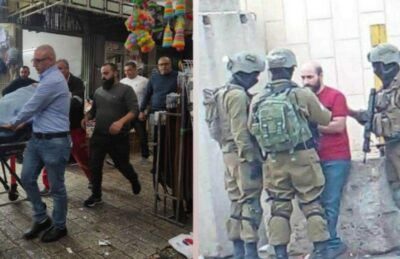 On Monday evening, Israeli soldiers abducted a Palestinian man after assaulting him and his mother in front of their home in the Bab az-Zawya area in the center of Hebron city, in the southern part of the occupied West Bank. The mother was moved to a hospital in the city.

The Palestinian News & Info Agency (WAFA) said the soldiers assaulted Yahia Mohammad Tamimi, 29, and confiscated his mobile phone before attacking his mother, who tried to defend him.

The soldiers attacked the young man again and forced him into their jeep before taking him to an unknown destination.

WAFA added that Mohammad and his mother, 67 years of age, were walking to a nearby pharmacy to buy medicine for her when the soldiers assaulted them and abducted the young man.

Palestinian medics were called to the scene and rushed the wounded mother to the Hebron governmental hospital.

Also, the soldiers abducted six Palestinians, including two children, in Qalqilia and Ramallah in the central and northern parts of the occupied West Bank.