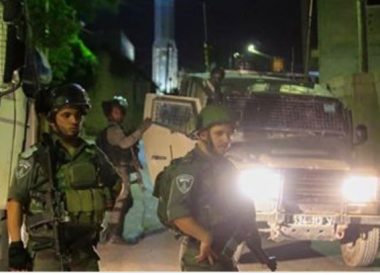 Israeli soldiers abducted, on Wednesday at dawn, five Palestinians from their homes, after dozens of soldiers invaded Hebron city, in addition to nearby Halhoul and Beit Ummar, north of Hebron, in the southern part of the occupied West Bank.

The Hebron office of the Palestinian Prisoners’ Society (PPS) has reported that the soldiers abducted Husam Abu Sabha, 20 from his home in Halhoul town.

The soldiers also invaded the downtown area in Beit Ummar, in addition to Safa area, before storming and ransacking many homes, including the home of Rifat Sleibi, Mohammad Ahmad al-‘Allami, Ashraf Khalil Abu Mariya and his brother Ayman.

In related news, the soldiers invaded and violently searched two homes, owned by Hatem Ali Zeid and Mustafa Khaled Zeid, in Nazlet Zeid area, in Ya’bad town, south west of the northern West Bank city of Jenin, and interrogated them along with their families.