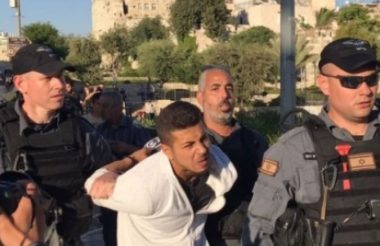 The soldiers, and police officers, assaulted a group of Palestinian journalists and photojournalists, near Nablus Street, in Jerusalem, as they were documenting a nonviolent procession in support of the Palestinian detainees, holding an open-ended hunger strike in Israeli prisons, for the thirteenth consecutive day.

The soldiers deliberately damaged cameras and equipment, owned by journalist Ahmad Gharabla, who was also assaulted by the soldiers.