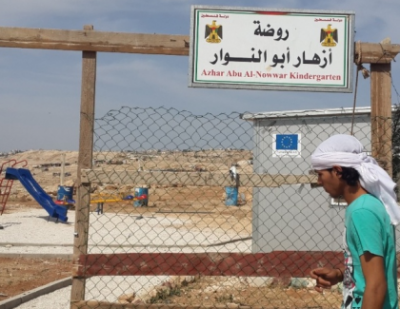 Israeli soldiers and officials of the “Civil Administration Office” invaded, Sunday, the Abu Nowwar Bedouin committee in the al-Ezariyya town, southeast of occupied East Jerusalem, and took pictures of a room that was added to the local elementary school.

Daoud Jahalin, the spokesperson of Abu Nowwar community, said the soldiers surrounded the local school, and photographed a recently added room, an issue that raises fears the army intends to demolish it, especially since most demolition orders are issued by the Civil Administration of the Israeli army, in the occupied West Bank.

It is worth mentioning that on February 21, 2016, the army invaded the Abu Nowwar community and confiscated seven mobile homes that were donated by the European Union to be used for schooling the children, and were placed on six Dunams (1.48 Acres) of land to provide schooling to sixty male and female students. Abu Nowwar is one of many communities inhabited by Palestinians who are initially from the Negev, and were displaced by Israel in the 1950’s, and are currently facing further displacement and demolitions for the construction and expansions of Israel’s illegal colonies in the occupied West Bank, including in and around occupied Jerusalem.

The army also surrounded Al-Quds University in Abu Dis town, southeast of Jerusalem, and clashed with many Palestinians, after the soldiers harassed and assaulted several students.