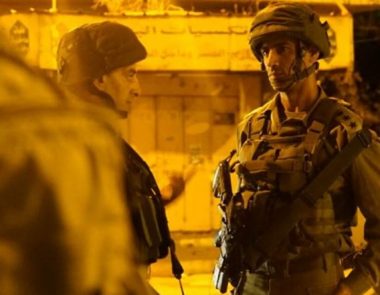 The Palestinian Prisoners Society (PPS) has reported that Israeli soldiers have kidnapped, overnight and earlier on Tuesday, thirteen Palestinians, including two children, in different parts of the occupied West Bank.

In Jenin, in the northern part of the West Bank, the soldiers searched a few homes and kidnapped Nidal Ja’far, 30, and Mahmoud Ma’moun Hawasheen.

In Ramallah, in central West Bank, the soldiers invaded the al-Am’ari refugee camp, and kidnapped Mohammad Sobhi Nimir, 23, after breaking into his home and searching it. Also in Jerusalem, the soldiers stopped and harassed a large number of schoolchildren and young men in Bab al-‘Amoud area, while provocatively searching and humiliating them.

The soldiers also invaded at dawn the home of Misbah Abu Sbeih, in the ar-Ram town, north of Jerusalem, and photographed its interior and exterior in preparation for demolishing it.

Abu Sbeih was killed by the army, on October 9th, after carrying out a drive-by shooting in Jerusalem, killing two Israelis and wounding six others.

Following his death, the soldiers repeatedly broke into it his home, and homes of his relatives, and abducted his father and his daughter, Eman Abu Sbeih, along with several other siblings and relatives.

Also on Monday at night, the soldiers invaded the home of detainee Jad Sultan, in Hebron city, in the southern part of the West Bank, and violently searched it.

His family said the soldiers brought their detained son with them during the search; Sultan was kidnapped by the army two days ago.

The soldiers also fired several concussion grenades and gas bombs at a few homes close to Sultan’s property, and withdrew from the area.