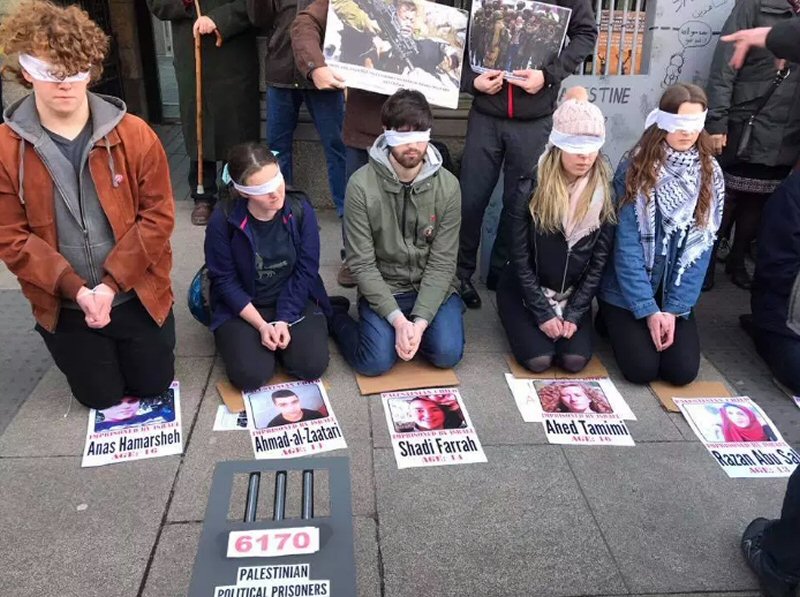 The following article, by Charlotte Kates, the international coordinator of Samidoun, initially appeared in Arabic in Al-Adab magazine, published on November 2, 2018. The Arabic text can be read online at the Al-Adab website. The article appeared in an issue with a special focus on Palestinian prisoners, including testimonies from current and former political prisoners and their families. (Photo: Fatin al-Tamimi)

Ghassan Kanafani’s quote that “Palestine today is not a cause for Palestinians only; it is the cause of every revolutionary, the cause of the oppressed and exploited masses in our era”[1] has not dulled in its accuracy over time. Perhaps it resonates more clearly than ever before, when U.S. imperialism and its European partners appear as an ongoing threat to Palestinian existence and self-determination as well as to any form of Arab unity or even truly independent policy.

There are many campaigns that capture the attention of the international solidarity movement, all of them worthwhile and challenging some aspect of the Zionist project in occupied Palestine – from the campaign to break the siege on Gaza, to building boycott campaigns against Israeli corporations, state entities or academic and cultural institutions, to working with Palestinian communities in countries of exile to fight back against racism and repression. The struggle to defend Palestinian political prisoners and seek their freedom is central to building solidarity with the Palestinian people, their national liberation movement and their revolution.

The Zionist movement and state certainly recognize the centrality of this issue; it should be noted that Gilad Erdan, the minister who carries the file of “public security,” including the Israel Prison Service, is also responsible for the “anti-boycott” initiatives of the Israeli state in his role as the Minister of Strategic Affairs[2]. The Zionist campaigns against the Palestinian prisoners – both the propaganda campaigns in international media and the campaigns of repression and misery that aim to break the spirit of the prisoners – recognize just how central these men and women, children and elders are in the struggle for Palestinian liberation.

Palestinian prisoners, both to the occupier and to the occupied, to those who would build solidarity and those who would criminalize, represent the implacable will of Palestinians to resist occupation and oppression, by all means necessary. The very act of posting on social media about Palestinian armed resistance has been labeled incitement; hundreds of Palestinians have been arrested and jailed for their statements on social media in support of Palestinian resistance[3]. And any involvement at all with the organized liberation movement – from the most common charge of membership in a prohibited organization to those who directly take up armed struggle – can be met by years and decades behind Israeli bars.

There are, of course, many organizations on the ground in Palestine doing excellent and important work to defend the prisoners legally and politically and seek their freedom. However, this work has not been exempted from the framework that Oslo has imposed on the Palestinian movement as a whole. Increasingly, the political aspect of Palestinian prisoners’ cases has been replaced with a purely humanitarian or human rights-based approach. The prisoners’ cause, like many other aspects of the Palestinian struggle, has been professionalized into an area of work and commentary for lawyers and other legal experts. Palestinian prisoners are addressed primarily and mainly as victims rather than protagonists in a revolutionary struggle for liberation.

In reality, every Palestinian prisoner’s case is far less of a legal battle than it is a political one; yet our strategies are increasingly directed toward legal defense, even while acknowledging politically that the entire system is invalid and illegitimate. It is not possible to win the freedom of Palestinian political prisoners by presenting the perfect legal argument, as – whether they face military courts or Israeli “civil” courts – they face a system that is based on the complete negation of their existence and, particularly, their organization and resistance.

This situation is also reflected in the violent response of the prison system to any and all attempts by the Palestinian prisoners’ movement to exert their intellectual and political leadership in the Palestinian national liberation struggle. It has been said that the Palestinian leadership that is not compromised or liquidated in the Oslo process can best be found behind bars. In response to their statements and interviews, conveyed through secret messages, smuggled cell phones and other technologies that defy Israeli isolation, Palestinian prisoners are subject to raids, violence, forced transfers and isolation. The recent interview of Palestinian political leader, PFLP General Secretary Ahmad Sa’adat, published in El-Masry al-Youm[5], sparked harsh raids and repression against Palestinian prisoners in Ramon prison[6]. Veteran prisoner and struggler from ’48, Walid Daqqa, was thrown into solitary confinement when he published a new children’s book; this followed the defunding of a Haifa Palestinian theater that exhibited a play based on his work[7].

The international aspect of the Palestinian prisoners’ struggle is not one that can or should be relegated to the corridors of the United Nations and international legal bodies. It must be noted that this is something that the Zionist movement clearly recognizes as well. The imperialist countries like the United States, France and other states of the European Union are full partners in the imprisonment of Palestinians and the legitimization of the charges against them through their campaigns against the resistance.

Today’s “anti-terrorism” laws have various legal precedents – most commonly in the laws used to suppress anti-colonial and liberation movements in the Western powers – but they stem directly from laws that were passed in the United States in the mid-1990s. Those laws were then exported around the world with the 11 September 2001 attacks. The original U.S. laws were explicitly justified as a means of supporting the “Middle East peace process,” i.e. the Oslo process, and criminalizing all of those parties that rejected Oslo[8]. Thus, we see the “terror lists” of the United States, Canada, the European Union, the UK, Australia, packed with the names of Palestinian organizations seeking national liberation, who rejected the trap of Oslo – the Popular Front for the Liberation of Palestine; Hamas; Islamic Jihad; and even those fighters of Fateh who resisted pacification.

These “anti-terror” laws are used to justify the persecution of Palestinians inside these countries – see, for example, the case of the Holy Land Five, five Palestinians serving sentences of up to 65 years in prison in U.S. jails for their fundraising and charitable work for Palestine[9]. Reflecting the fact that these are only the newest gloss on an existing strategic alliance, Georges Ibrahim Abdallah has been jailed for 34 years in France for his involvement in actions to support the Palestinian and Lebanese liberation struggles. In Palestine itself, U.S. and British guards – including those previously stationed in the colonized north of Ireland – surrounded the Palestinian Authority’s Jericho prison where Sa’adat and his comrades were held from 2002 to 2006. Those guards moved aside in a coordinated fashion to allow for the violent assault of the Israeli military in March 2016.

Just as upholding the Palestinian prisoners, their names, lives and politics, is a contribution to the defense of the resistance in the battle of ideas, the European Union and the Zionist state have also recognized the importance of this battle from the opposing perspective. Thus, we have seen the defunding of Palestinian schools that bear the names of martyrs and strugglers who gave their lives for Palestinian liberation by participating actively in resistance. From Dalal Mughrabi (targeted by Norway and Belgium) to the campaigns against schools and squares honoring Shadia Abu Ghazaleh and Khaled Nazzal, there is not only a battle over the names of schools and institutions but a battle for Palestinian memory and history[10]. It is our responsibility to fight back by upholding Palestinian resistance leaders as the international social justice leaders for which they should be recognized.

This very battle of ideas is the reason why Erdan, in his campaign against the growing boycott movement, included Samidoun Palestinian Prisoner Solidarity Network among dozens of other international groups in his latest propaganda alert against international solidarity with Palestine[11]. Erdan connected Samidoun and others with a “red line” on his graphic to the Popular Front for the Liberation of Palestine. The illustration is not a random choice but reflects the Zionist project’s concern about a closer linkage between what the Reut Institute, a Zionist strategic center, referred to as the “delegitimization” network and the “resistance” network[12].

Through public exhortations and campaigns about dubious alleged linkages with resistance organizations, Erdan and the Israeli state aim to spread fear and intimidation among solidarity organizations. These attacks aim to push such organizations to alter their rhetoric, polices and campaigns in an attempt to avoid such allegations and their potentially criminalizing consequences. It is not simply propaganda against Palestine solidarity – this project aims to undermine the legitimacy of the Palestinian resistance and its association with global struggle and, therefore, to isolate the issue of the prisoners from its political context.

In the struggle of the Palestinian prisoners for freedom – an indivisible aspect of the Palestinian people’s struggle for liberation – we can find the seed of connection that holds the potential for building the type of deep alliances – those most feared by Erdan and the forces he represents –  that can truly challenge Zionism, imperialism, capitalism and their reactionary-regime allies.

The Palestinian prisoners’ liberation cannot be disconnected from global struggles for liberation, nor from the struggle to liberate the political prisoners in the Philippines, Turkey, Egypt, the United States and elsewhere. Building the struggle for their freedom reflects the common interest of revolutionary movements fighting for justice and liberation, on the front lines of confrontation with repression, racism, exploitation and fascism.

[3] “When it comes to Facebook ‘incitement,’ only Palestinians are arrested, not Jewish Israelis,” Danielle Alma Ravitzki, Mondoweiss, May 22, 2018, https://mondoweiss.net/2018/05/facebook-incitement-palestinians/

[11] Samidoun, “Gilad Erdan wants to shut us down while attacking prisoners,” June 20, 2018; https://samidoun.net/2018/06/gilad-erdan-wants-to-shut-us-down-while-attacking-prisoners-well-keep-fighting-for-palestinian-freedom/