Palestinian Recounts Brutal Israeli Dog Attack: ‘I bled for two and a half hours.’ (VIDEO) 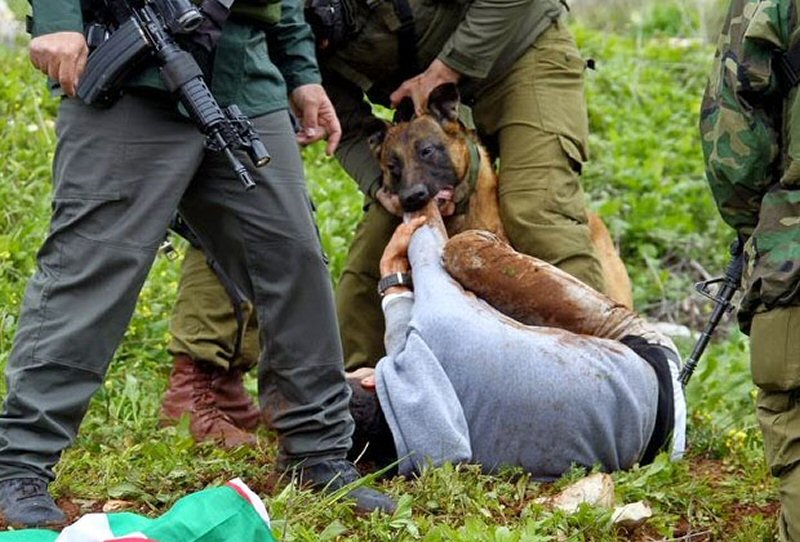 This is a long-standing policy used by Israeli occupation forces against Palestinians, says Max Blumenthal.

Mabruk Jarrar, a 39-year-old schoolteacher, was savagely mauled by Israeli military dog during a raid on his home in the occupied West Bank. Here, he recounts his horrific experience.

While Israeli occupation authorities insist that this was an isolated incident, reports on the ground seem to suggest otherwise.

“I woke up when I heard explosions, I looked to my house door and it was destroyed by IDF [Israeli Defence Forces] bomb,” Jarrar, told RT’s Ruptly video agency, from his hospital bed.

As he gathered his family in the bedroom, he heard several more explosions, one of which took down the main house door before he was set upon by the dog.

“I saw one dog that started to attack me and bit my shoulder. Then, it started to bite my leg. I was screaming,” he continued. “After I was bleeding for more than two hours and a half, they took me to the hospital.”

The savage mauling, which left Jarrar in need of a skin graft, took place on February 3, during an operation in Jarrar’s home village of Burkin.

During the raid, the soldiers also forced Jarrar’s wife, mother and disabled sister to strip for a body search, and arrested his two brothers, one of whom remains in custody.

“I consider it a war crime. They attacked my home and frightened my children and my wife,” Jarrar said.

According to journalist Max Blumenthal, the use of attack dogs on Palestinians is part of a long-standing policy.

“This is being cast by the Israeli military and government as kind of an isolated incident, but, as any of us who follow the situation in the West Bank, this is far from isolated.

“It is part of a clear policy of using dogs as an advance team during home raids on Palestinians,” Blumenthal told RT, noting the high-profile case of 16-year-old Hamzeh abu-Hashem, accused of throwing stones at soldiers in 2015.

A representative of Breaking the Silence, an organisation comprised of former Israeli soldier, told RT, at the time, that such cases are “not unusual.”

“These dogs apply 2,000 pounds of pressure per square inch, and Israeli soldiers were taunting him on video,” continued Blumenthal.

“And, now, Hamzeh abu-Hashem and the Palestinian rights group Al-Haq are suing not Israel, but actually the Dutch company Four Winds K9 – which has supplied what it calls biting dogs to the Israeli military – for violating UN conventions on companies operating in conflict zones.

So this is a very significant lawsuit and it speaks to a wider policy of what the Israeli dissident journalist Gideon Levy calls ‘lynching by dog.’”

02/17/18 VIDEO: Israel Makes Palestine One of Most Dangerous Places for Children