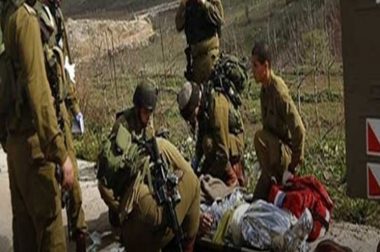 Early Sunday morning, a Palestinian man was shot in the head and critically wounded after allegedly stabbing an Israeli soldier just outside the settlement of Efrat, south of Bethlehem.

The Palestinian who was shot was identified as Baha’-Eddin Mohammad Khalil, estimated to be about 30 years old.

The Israeli officer have been identified at the time of this report, but Israeli sources say that he is 22 years old. His injury was non-critical, and medics stated that he was stabbed in the armpit but never lost consciousness and sat and spoke with the medics the whole way to the hospital.

No information was released by the Israeli medics as to the transport of the Palestinian who was shot in the head, but he was listed in critical condition in the Jerusalem hospital where he was taken.

According to the Times of Israel, the officer was part of a brigade of officers that had been sweeping the area outside the settlement wall after the security surveillance system detected movement in the Palestinian farmland surrounding the settlement.

Following the incident, Israeli forces invaded the city of Hebron and imposed a closure on Palestinians living in the villages and towns around Efrat.

The shooting of the Palestinian man Sunday morning follows the killing of four Palestinians and a Jordanian in the past two days, all of whom were killed by the Israeli military.

On Saturday morning, a Palestinian was killed in Hebron after allegedly ‘lightly stabbing’ a soldier who was invading the town.