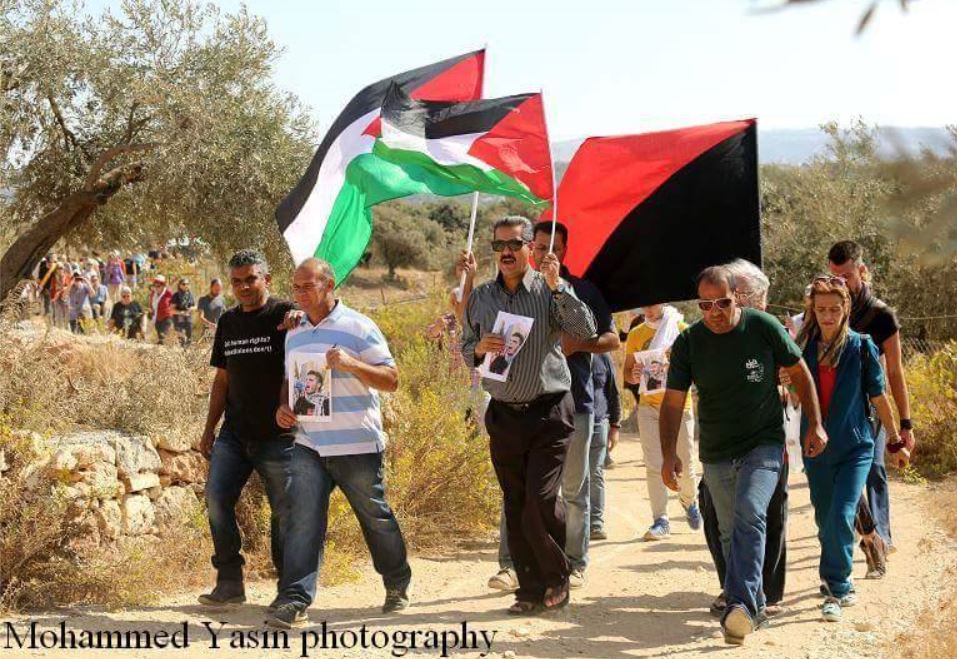 On Friday afternoon, around 50 international supporters joined 30 local residents and 10 Israelis in a protest against the Israeli Annexation Wall.

They marched from the center of Bil’in towards Palestinian lands close to Modi’in Illit colony, where they raised Palestinian flags and pictures of an Israeli activist who recently died from cancer.

The Israeli they memorialized was a known activist and a supporter of the Palestinian struggle against the occupation, the wall and colonies.

Some protesters cut sections of the barbed wired fence, which had been installed in certain areas with electronic sensors by the Israeli military. There were many supporters, and journalists, from Brazil, in addition Americans and from various other countries.

Many soldiers were deployed on the Palestinian land in front of and behind the wall. They fired high-velocity tear gas toward the crowd, forcing them back away from the site of the wall construction.

Ashraf Abu Rahma told the IMEMC that the protests will continue, despite the excessive use of force by the army. Abu Rahma pointed to the steadfastness of the residents of Bil’in, as well as the ongoing support of Israeli and international peace activists.

Ashraf Abu Rahma said the nonviolent protests in Bil’in started in 2015, and managed to achieve many successes including the rerouting of the Wall in certain areas due to court cases in the Israeli legal system, in addition to regaining nearly 1000 Dunams of orchards belonging to the villagers.

Ashraf’s brother, Bassem Abu Rahma  was killed April 7, 2009, when a soldier fired an international banned high velocity gas bomb that struck him in the chest, fracturing his ribcage and punctured his heart.  His sister, Jawaher Abu Rahma, was also killed on January 1, 2011, when the soldiers attacked a nonviolent and fired dozens of gas bombs in various directions leading to her death after her lungs collapsed from the toxins in the bombs. More on the case of Jawaher Abu Rahma