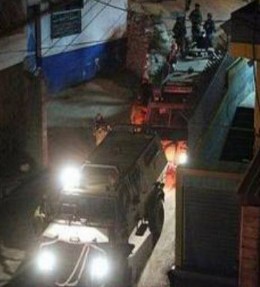 Palestinian medical sources have reported that many residents have been injured, on Thursday evening, after Israeli soldiers invaded the al-Khader town, south of Bethlehem.

The sources stated that the residents, including children, suffered the severe effects of teargas inhalation, and received the needed medical treatment.

Ahmad Salah, the coordinator of the Popular Committee against the Wall and Colonies in al-Khader, said several Israeli army jeeps invaded the town, especially the mosque area in its center, and fired dozens of gas bombs during ensuring clashes.

The invasion into al-Khader was carried out from several directions, there has been no reports of arrests.

In related news, the Palestinian Prisoners Society (PPS) has reported that Israeli soldiers have kidnapped overnight and on Thursday morning, at least six Palestinians in the West Bank districts of Jerusalem, Jenin, Nablus and Bethlehem.

In addition, the soldiers invaded a print shop in the al-Ram town, north of occupied East Jerusalem, violently searched it, and confiscated all of its equipment, and printed materials.

Furthermore, the soldiers shot and injured a young Palestinian man, during clashes that took place after dozens of soldiers and settlers invaded Nablus, while several army vehicles also invaded homes in Qaryout village, south of Nablus.

On Tuesday evening, the army lifted a gag order on information regarding the arrest of five Palestinians from Ni’lin village, west of Ramallah, who reportedly carried out a shooting attack targeting Israeli soldiers, last week.