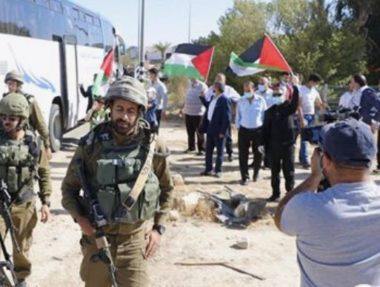 Israeli soldiers attacked, Thursday, dozens of Palestinians in Fasayel village, in the Jordan Valley of the occupied West Bank, causing dozens to suffer the effects of teargas inhalation.

The villagers, accompanied by several cabinet members and Palestine Liberation Organization (PLO) officials, were trying to hold a meeting in the village, located north of the Palestinian city of Jericho, to discuss measures the American-backed illegal Israeli colonial annexation of the Jordan Valley.

The soldiers resorted to the excessive use of force against the civilians, leading to protests; the army fired a barrage of gas bombs, concussion grenades and rubber-coated steel bullets, causing dozens of injuries.

Despite the military closures and strict measures, scores of residents managed to reach Fasayel village on bicycles, on foot through the hills and lands, to express their rejection to the Israeli, American-backed, theft of the lands, especially in the Jordan Valley.

The Jordan Valley of the occupied West Bank is the fruit basket of Palestine, and is a vital fertile area used by the Palestinian farmers and shepherds, who are subject to constant and escalating Israeli violations, including invasions and live-fire military training.

It is also an area widely targeted by Israel for the construction and expansion of the illegal colonies, built in direct violation of International Law, the Fourth Geneva Convention in addition to various United Nations and Security Council resolutions.