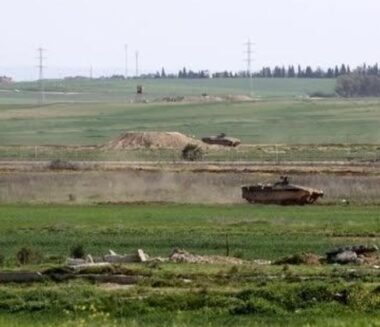 Several Israeli military vehicles invaded, Wednesday, Palestinian farmlands near the perimeter fence, east of Rafah, in the southern part of the Gaza Strip, and fired many rounds of live ammunition.

Media sources said seven Israeli military vehicles, including bulldozers and tanks, stationed in military bases across the fence, invaded the Palestinian lands and advanced dozens of meters into the an-Nahda neighborhood, east of Rafah.

They added that the soldiers bulldozed several sections of the invaded lands, and installed sand hills, while firing smoke bombs.

The Israeli army frequently invades Palestinian lands near the fence across the eastern parts of the besieged coastal region, in addition to the constant attacks targeting the fishermen in Palestinian territorial waters.