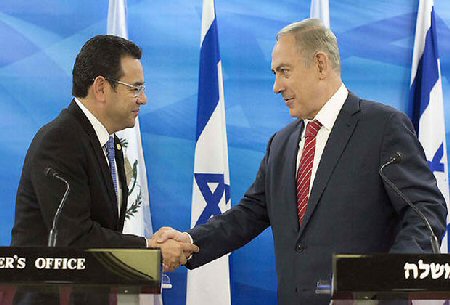 After Guatemala, Israeli occupation authorities say that another two countries will move embassies of their countries to Jerusalem.

Guatemala’s eastern neighbors, Honduras and Paraguay, are also expected to join the trickle of embassies flowing into Jerusalem.

The two Central American countries, Honduras and Guatemala, were among the seven countries that voted with the US and Israel against a UN General Assembly resolution last Thursday, which declared Trump’s declaration “null and void.”

Paraguay, according to Days of Palestine, abstained from the vote, despite having demonstrated, in the past, its particularly pro-Israel disposition.

In his announcement, Guatemalan President Jimmy Morales said that moving his embassy would take place only after the US led the way, but Washington’s decision is expected to encounter significant delays that could last years, potentially outliving the Trump administration.

Guatemala kept its embassy in Jerusalem until 1980, but, following Israel’s decision to annex Jerusalem in 1980 and declare the city to be its united capital, a diplomatic spat ensued with a number of countries, Guatemala among them, which chose to move its embassy from Jerusalem to Tel Aviv in protest.

Morales made his announcement in a Facebook post on Christmas Eve, following a conversation he had held with Prime Minister Benjamin Netanyahu and in the wake of Trump’s declaration on Jerusalem.