Military Roadblocks? We Have An App For That! 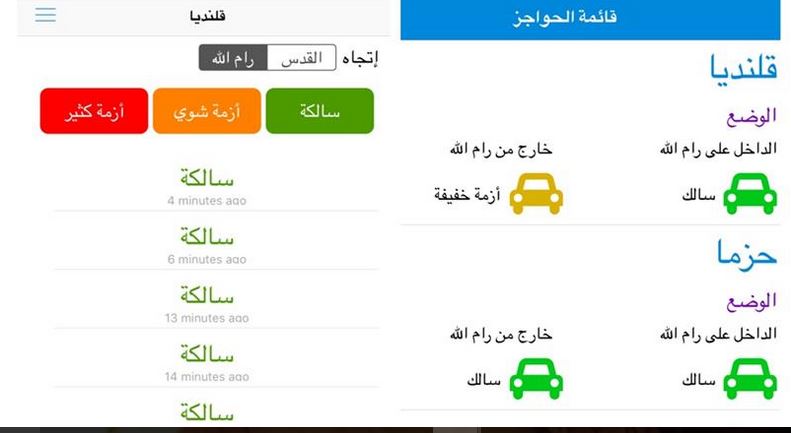 Palestinian developers have managed to create two new digital applications to be used on smart phones, in different parts of the occupied West Bank, in order to alert the public about the conditions at the numerous Israeli military roadblocks scattered along the occupied territories. The new apps, known as “Azmeh”, which means “traffic jam” –- and, specifically those resulting from Israeli military roadblocks — and “Qalandiya”, referring to the Qalandia terminal, north of occupied Jerusalem.

The apps are meant to help drivers and, of course, Palestinians, to know which roadblocks are currently closed by the army, where new temporary roadblocks have been installed, and information regarding the various roadblocks in different parts of the West Bank.

They can also be used as informative tools, to help indicate which areas the is army invading, in cities, towns, neighborhoods — in every part of the West Bank, including Jerusalem.

The Azmeh app was developed by Bassel Sader, 20 years of age, as a method of identifying all areas known to have traffic jams and delays resulting from Israeli military roadblocks and closures, and also works as any other app which identify roads which are jammed due to any number of reasons.

The Qalandiya app was designed by Ahmad Zboun, while reflecting on his own daily sufferings, as he continues with personal attempts to cross the Qalandia terminal which separates Ramallah from Jerusalem, controls all traffic leading to the southern district of the West Bank.

Zboun said that he understands the Israeli restrictions, mainly those denying Palestinians access to high-speed internet and, therefore, developed the app, which does not require fast internet and does not consume excessive bandwidth.

The roadblocks, spread across the occupied West Bank, come in various forms; some are permanent, including those which have military bases attached to them, while dozens of roadblocks are temporary, known as “sudden” roadblocks.

With sudden roadblocks, the scenario depends on the soldiers’ varying moods, depending on which time of day or night one is traveling.

There have been hundreds of instances in which Israeli soldiers, driving their military vehicles, just decided to park in the middle of the road and start searching cars, interrogating Palestinians, inspecting ID cards, etc.

A simple journey between one Palestinian district to another, within the entire (tiny) West Bank, could take an hour, ten hours or, perhaps, even a whole day, depending not only on the security situation on a certain day, but the moods of the soldiers, as well.

In many cases, traffic jams resulting from Israeli military roadblocks can extend to hundreds of meters or, even, several kilometers, as the soldiers tend to take their time before allowing a single car to pass, and, in many cases, these teenage soldiers would just keep hundreds of Palestinians waiting, until they had finished texting or talking on their mobile phones, or even while they played a game on their smart phones.

Palestinians, in the meantime, have no option but to wait, whether they are going to work, to school or, simply, making a visit to friends and relatives. Even ambulances have to, in many cases, just wait there, and beg to be allowed through, to save the life of a Palestinian!

Although the vast majority of Israeli roadblocks neither lead to Jerusalem nor to Israel, occupation authorities maintain the rhetorical justification that these strict “security measures” are essential in order to maintain the safety of Israel and its civilians.

Many roadblocks are installed close to illegal Israeli colonies in the occupied West Bank, while Israeli colonizers are able just zip through without even slowing down, because they have special “Jewish-only” routes, while Palestinians simply have to wait until the soldiers eventually allow them through. Yet, in many cases, they are forced to turn back and leave.