The U.S. Will Not End the Occupation 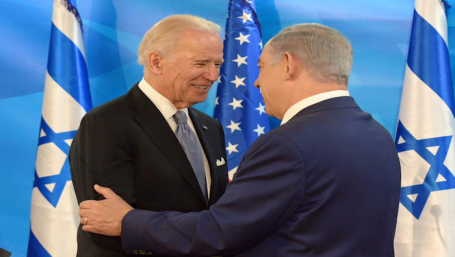 On Tuesday of last week, Vice President of the United States, Joe Biden, met with Israeli Prime Minister Binyamin Netanyahu. The meeting was conducted in an atmosphere rife with rumors and uncertainty: uncertainty about whether Israel would (again) embarrass Biden during his visit with an announcement of settlement expansion; whether Obama had indeed planned to meet Netanyahu in Washington D.C., later this month; and, whether Netanyahu really did cancel his visit to the U.S. so as to avoid influencing the U.S. presidential primaries.

Prior to Biden’s arrival in the area, it was clear that his agenda would ignore the Israeli occupation and focus on American-Israeli cooperation in Syria, Iran and ISIS, and the perpetual question about (the size of) American military aid to the Jewish state.

However, while these issues are important to Netanyahu, the symbolic significance of Biden’s visit is what mattered most. Recently, Netanyahu has been the recipient of stinging criticism for ostensibly causing the destruction of Israel’s special relationship with the United States and, thus, contributing to Israel’s global isolation. Avigdor Lieberman, leader of Yisrael Beitenu, and Yair Lapid, head of Yesh Atid, are his primary skeptics. To counter their criticisms, Netanyahu emphasizes in his speeches his many visits with presidents and prime ministers in Israel. Biden’s visit provided Netanyahu with new material to refute these charges and demonstrate that he can prevent an international political blockade of the state.

Israeli and American newspapers claim that up the Obama administration’s sleeve is the possibility of both the United States approaching the United Nations Security Council to craft a resolution to kick start peace in the region. However, France is considering doing the same, and the two states hold wildly disparate views on what the resolution should look like. France tends to focus on the need to halt Israeli settlements and recognize East Jerusalem as the capital of the Palestinian state. The Americans, however, want to get rid of such requirements, demand Palestinians recognize Israel as a Jewish state, and renounce the right of return! Though the U.S. knows there is no chance that Palestinians will accept its conditions, U.S. input on the resolution will have great impact on the global debate on Palestine, and stand an “alternative” to French initiative.

The Wall Street Journal reports that Obama hopes to advance progress between Israel and the Palestinians before leaving the White House, and that doing so is possible. However, considering Israel’s extremist right-wing government will not stop building settlements, does not believe in the two state solution and accuses Palestinians of being a powerless non-partner for peace, I disagree. The Israeli government is and remains the core obstacle to obtaining peace.