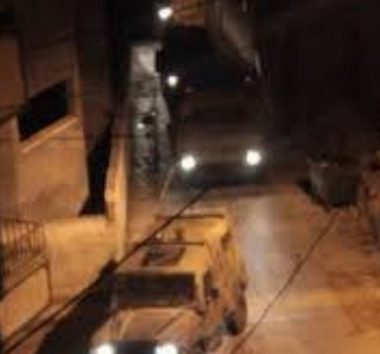 Israeli soldiers abducted, on Wednesday at dawn, eight young Palestinian men, from their homes, in different parts of the West Bank governorates of Nablus, Tulkarem and Hebron, the Palestinian Prisoners’ Society (PPS) has reported.

The Nablus office of the PPS, in the northern part of the occupied West Bank, said dozens of soldiers invaded Balata refugee camp, east of the city, searched and ransacked homes and abducted three young men.

It is worth mentioning that Noubani was abducted twice before, and spent seven years in Israeli prisons, detention and interrogation centers.

In addition, the soldiers invaded Doura town, south of Hebron, and surrounded an apartment building, before detonating the doors of many apartments, located near the elevators, and ransacked them.

Media sources in Hebron said the soldiers abducted Hasan Mohammad al-Fasfous, 32, Mousa Mohammad Daraweesh, 25, and a third Palestinian, whose identity remained unknown until the time of this report.

It is worth mentioning that Fasfous has been wanted by the Israeli army for the last five years, and the soldiers detained his mother to pressure him into turning himself in to the military.

On Tuesday evening, the soldiers installed an electronic military gate and a watchtower at the entrance of Tal Romeida neighborhood, in the center of Hebron city.