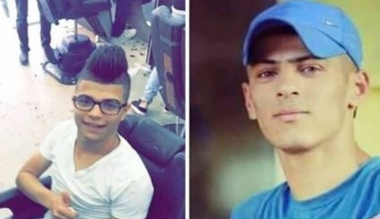 Dozens of Israeli soldiers invaded, on Wednesday at dawn, Jenin refugee camp, in the northern West Bank city of Jenin, and clashed with dozens of youngsters, before killing two Palestinians with live rounds, and wounding at least one with an expanding bullet.

The sources added that the soldiers also shot Odai Nizar Abu Na’sa, 19, with an expanding bullet in his leg, causing a serious injury.

Sources at Khalil Suleiman hospital, in Jenin, said Salah was shot with three live rounds, including one in the head, and succumbed to his wounds on the operating table.

Salah’s uncle, said the slain young man has three brothers; one of them, Yousef, is imprisoned by Israel, and the second is a former political prisoner, while their father became paralyzed several years ago, after the soldiers shot him in his back.

The Israeli army claimed that many Palestinian protesters hurled homemade explosives and Molotov cocktail on the military vehicles.

Also at dawn, the abducted eight young Palestinian men, from their homes, in different parts of the West Bank governorates of Nablus, Tulkarem and Hebron.

On Tuesday evening, the soldiers installed an electronic military gate and a watchtower at the entrance of Tal Romeida neighborhood, in the center of Hebron city.