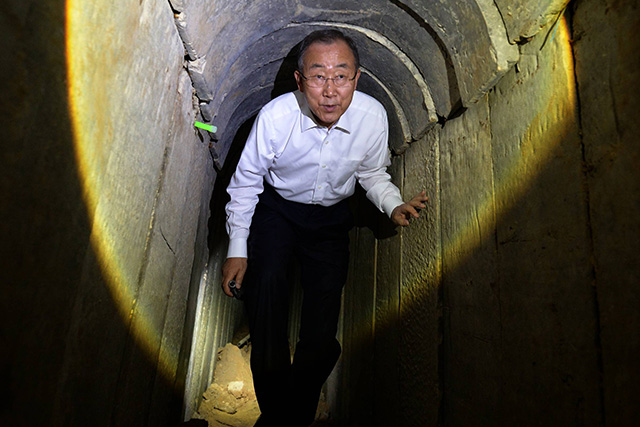 Christof Lehmann (nsnbc) : UN Secretary-General Ban Ki-moon visited Israel and Palestine. Following a meeting with Israeli President Reuven Rivlin in Jerusalem, Ki-moon noted that nearly 50 years of occupation of Palestinian land has not brought security for Israelis. Ban’s generalizing statements, void of specific criticism with regard to the illegal occupation, settlements, and war crimes prompt the question whether the UN is a lame duck or a tame dog.

The UN Secretary-General stressed that only a negotiated two-State solution could bring the legitimate aspirations of both Israelis and Palestinians to fruition. Ban was citing the latest terror attack in Tel Aviv and said that stabbings, shootings and bombings will not achieve anything because violence “is never a solution.” “

Such acts are precisely designed to breed fear and uncertainty. They eat away at trust and hope, drive Palestinians and Israelis farther apart, and strip away a sense of empathy for one another,” he said at a joint press encounter with the Israeli leader.

“I must be equally clear that nearly 50 years of occupation has had a devastating impact on Palestinian lives, undermining the belief in a peaceful resolution to this conflict,” Mr. Ban added. “It also has not brought security for Israelis.”

Ban Ki-moon was urging both Israeli and Palestinian leaders to take concrete steps to restore hope and a political horizon. He added that “a negotiated two-state solution remains the only viable option to prevent perpetual conflict and to achieve the legitimate aspirations of both peoples.”

Ban also encouraged both sides to engage with the Middle East Quartet – made up of the European Union, Russia, the United States and the UN – which continues to work with the parties and the region to bring about the necessary conditions for the resumption of meaningful negotiations and is finalizing its first report on the impediments to the two-state solution and the way forward. Addressing Rivlin, Ban said “Mr. President, I count on your courage and leadership to take the bold actions that will establish a just, comprehensive and lasting peace for the people of Israel and Palestine.”

Earlier in the day, Ban spoke at Tel Aviv University, where he accepted the George S. Wise medal, an award named after an American Jewish sociologist who served as the first president of the institution. The UN chief noted that, over the past ten years as Secretary-General, he has witnessed countless examples of the power of science and technology to transform human lives. He said:

“Our challenge is to harness the innovation taking place in the research labs of this campus and around the world to meet the challenges facing humanity – from tackling climate change and disease, to preventing cyber-crime, promoting food security and so much more.”

Mr. Ban flagged that the biggest war being waged today does not involve guns or tanks or fighter jets. “The biggest confrontation is the battle for minds,” he said. “On the one hand, there are those who want to divide the world into ‘us and them.’ On the other, stand those who see humanity, in the words of the UN Charter, as ‘we the peoples.’”

Palestinian and Israeli leaders must stand firm against terror, violence and incitement, the UN chief added, stressing the need for innovative thinking and action to tear down the walls of mistrust. “I urge the ‘start-up nation’ to help us all start-up peace … start up understanding … start up reconciliation for a better world,” he said.

Ban also encouraged the students to be global citizens, who never forget that challenges know no borders, and highlighted that they are also citizens of the world, urging them to help achieve the goals set out in 2030 Agenda for Sustainable Development, which he described as “a blueprint for building a people-centred, planet-friendly future.”

The UN Secretary-General also visited the Palestinian Gaza Strip. Addressing dignitaries and the press, ban said  “The UN stands with the people of Gaza.” He also stated, “Refugees are people, just like you and me.”

UN A Lame Duck or A Tame Dog?

The UN Secretary-General’s reference to one particular “terrorist attack” carried out by “a Palestinian” and his failure to address the disproportionately higher number of Palestinians who were killed or injured by Israeli military forces, police or militants raises serious questions about the Secretary-General’s alleged neutrality as a proponent of a “we the people” driven UN.

In February 2016 there were reported 181 killed Palestinians and 21 killed Israelis since October 1, 2015. Ban also forgot to mention that the vast majority of all of the reported death occurred in illegally occupied Palestinian territories.

While implying the validity of the “Palestinian Terrorism” narrative, Ban forgot to mention that Palestinians, under international law, have the right to take up arms and fight an invading or occupying power. This right to organize military or paramilitary units as long as they wear insignia, wear their weapons openly, and otherwise follow the laws of warfare also covers the armed groups of Palestinian factions.

It also covers the right to launch military attacks against forces that enforce the illegal blockade of the Gaza Strip. Ban’s recognition that “refugees are people like you and me” was, in the absence of the recognition of the Palestinian struggle, a slap in the face of those who have been suffering the consequences of Israel’s blockade that, according to the UN’s own figures, risks to render the coastal Palestinian enclave uninhabitable within six years.

Ban’s failure to assure residents in Gaza that he, in his function as UN Secretary-General would do all that is in his power to assure that the permanent UN Security Council members would intervene in the case of yet another absolutely disproportionate round of slaughter revealed that the UN is not a lame duck but a tame dog. A lap-dog that appeases primarily the United States and Russia, who have failed miserablywhen it comes to taking action against Israeli war crimes.

Ban Ki-moon correctly states that almost 50 years of Israeli occupation of Palestine hasn’t bought security for Israelis. The United Nations record of 50 years of failure to act against Israel while the UN Security Council has “legalized” illegal wars for far less than what was done to Palestinians hasn’t brought security to Palestinians either, and it will not bring security to Israelis as long as the “legal” resistance against Israel continues.