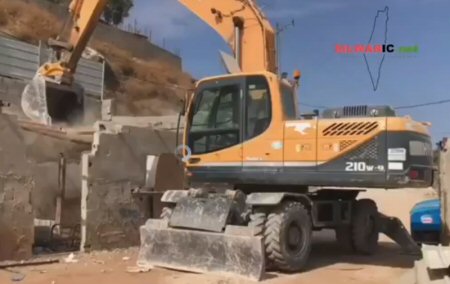 Israeli forces, on Wednesday, seized five Palestinian-owned bulldozers in addition to other excavation equipment, in the western Almazra’a village, northwest of the central West Bank city of Ramallah.

Board-member of the municipality of the western Mazra’a village, Waseem Ladadwa, told the Palestinian WAFA News Agency that dozens of Israeli soldiers invaded the quarry excavation site and seized equipment as well as a power generator.

“Not only did they [Israeli forces] seize that equipment, including five bulldozers, but they also held five workers inside a Caravan, and prevented them from working,” Ladadwa said.

Israeli interruption of the daily work and lives of Palestinian residents, in many areas of the occupied West Bank, have increased over the past several weeks.

Israeli officials have recently announced that the occupation authorities plan to annex the strategic Palestinian Al-Aghwar area of the Jordan Valley, by early next month.