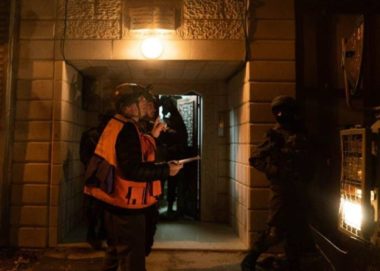 Israeli soldiers invaded, Wednesday, a neighborhood in Hebron city, in the southern part of the occupied West Bank, and handed orders for the demolition of two apartments, located in a five-story building, and owned by a detainee and his family.

Media sources said the soldiers handed the family two orders from the demolition of their apartments, one of them is 150 square/meters located on the fourth floor, and the second with the same size but located in the second floor.

The two apartments are owned by a detainee, identified as Atiya Erfa’eyya, 27, and his parents, and the family was ordered to demolish them by March 11.

It is worth mentioning hat Erfa’eyya was taken prisoner a month ago, after he reportedly killed an Israeli settler, identified as Ori Ansbacher, 19.

Furthermore, the soldiers summoned for interrogation a former political prisoner, identified as Mos’ab Zghayyar, after invading his home in Hebron city.

The soldiers also invaded the ath-Thaheriyya town, and Beit Ar-Roush village, south of Hebron, and installed many roadblocks at the northern entrance of Ethna town, in addition to the eastern entrance of Halhoul town, before stopping and searching dozens of cars, and interrogated many Palestinians while inspecting their ID cards.

Also on Wednesday, the soldiers abducted three Palestinians from their homes in Bethlehem governorate, south of occupied Jerusalem in the West Bank.

The soldiers also invaded Halhoul town, north Hebron, and shot two Palestinians with live fire, including one who suffered life-threatening wounds, in addition to causing many to suffer the effects of teargas inhalation.