Erdan Orders Halt On Transfer Of Bodies Of Slain Palestinians 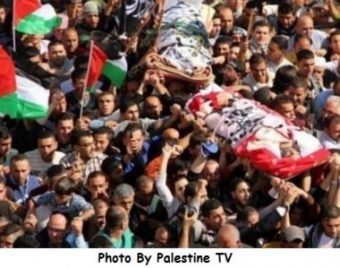 Israeli Public Security Minister Gilad Erdan alleged that the family of Ala Abu Jamal, that buried its son, Tuesday, after Israeli held his body for seven months after he was killed by the army “violated the terms of his burial.” The minister ordered a halt on the transfer of the remaining bodies of slain Palestinians to their families in Jerusalem.

Mohammad Mahmoud, the lawyer of the Ad-Dameer Prisoners’ Support and Human Rights Association, rejected Erdan’s allegations, and said that there are many parties in Israel that are trying to stop the transfer of slain Palestinians to their families, as a punishment to them.

Mahmoud added that the Abu Jamal family fully abided by the imposed Israeli preconditions; the process started with two family members identifying his corpse in the Oz Police station at the main entrance of Jabal al-Mokabber town, then during the official transfer at the town’s graveyard gate, his burial ceremony and the 40.000 bail that they had to pay.

“Erdan is not even in the country, he is traveling abroad, and now he is pushing for more punishment against bereaved families,” Mahmoud stated, “The Police never informed him of any decision or event that would cause a delay or obstruct in the transfer of the bodies of other slain Palestinians; the transfer was ordered in a decision made by the Supreme Court.”

|Soldiers Transfer The Body Of A Third Slain Palestinian|

Mahmoud also said that, directly after returning to the country, Erdan would be meeting with Israeli security and police officials, especially those who supervised the transfer and funeral – “they all know and saw how the family abided by all preconditions imposed on them.”

|Army Transfers Bodies Of Sister And Brother, Killed On April 27|

Erdan alleged that “the families lied to the Supreme Court,” and said – “it is a shame that the court believed them and pressured the police into releasing the bodies before the upcoming Muslim month of Ramadan.”

It is worth mentioning that Israel is still holding the bodies of six slain Palestinians, identified as;