26 Killed in Israeli Airstrikes on al-Wehda Street; 5 of Them Children 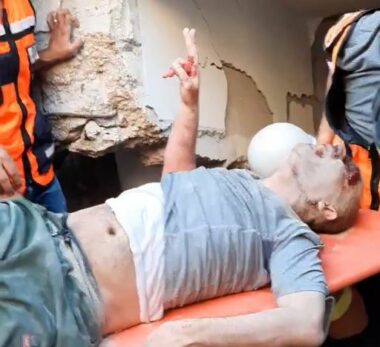 Update: Local media in Gaza have reported that the death count from the Israeli airstrikes on al-Wehda Street in al-Rimal neighborhood in Gaza City before dawn on Sunday has reached 26, at least five of whom are children.

The missile strikes killed 13 members of the al-Qolaqfamily, ranging in age from 1 to 85, as they huddled in their homes in terror while the Israeli airstrikes continued throughout the night. Local Palestinians have reported hearing as many as 150 Israeli bombs during the course of the night.

One of the families wiped out by an Israeli missile Sunday morning was that of Riyad Hasan IshKinatna, who was pulled out of the rubble Sunday morning by rescue crews, barely alive, only to be told when he reached the hospital that his wife and five children were all killed in the Israeli attack.

Also killed in the barrage of airstrikes on al-Wehda Street was Dr. Mo’in Ahmad al-Aloul, a neurologist and brain specialist.

The search is still going on for missing persons.

Below this article is a comprehensive list of the names of the killed who have been identified thus far in the Israeli escalation that began on Monday May 10th.

Israeli missiles killed, on Sunday at dawn, seven family members, including a mother and her five children, in their apartment in the al-Wihda Street, in the Remal neighborhood, in Gaza city.

Update: Darwish Mohammad Yazouri, 61, was killed in his home due to the Israeli bombing of Khan Younis, in the southern part of the Gaza Strip.

Media sources said the army fired a missile into the apartment of Riyad Hasan IshKinatna, killing his wife and five children. Riyad was later found under the rubble and was rushed to a hospital in Gaza.

The family is the second to be obliterated by Israeli missiles in less than 24 hours, after the army killed ten members of the Abu Hatab family, after firing missiles at their homes in the Shati refugee camp; only a baby, five months of age, survived the attack.

Also on Saturday night, the Israeli Airforce fired missiles at homes in the al-Wihda Street, killing Dr. Moin Ahmad al-Aloul, a neurologist and brain specialist, along with his wife and five children.

They added that the Israeli airforce and the navy fired many missiles into Gaza, targeting the homes, several buildings, and residential towers in various parts of Gaza.

The Israeli strikes also caused serious damage to many homes, structures, residential towers, and caused a power blackout in the Rimal neighborhood.

In a statement, the Health Ministry in Gaza said rescue teams and residents managed to find five children alive under the rubble of a bombarded home in Gaza, after the army fired missiles at homes and buildings in Gaza city, instantly killing two and wounding 25 others.

It added that, since many Palestinians are still missing, buried under the rubble, the number of slain Palestinians is likely to increase.

It is worth mentioning that the Israeli army fired at least twenty missiles into several parts of Gaza city, especially in the neighborhoods in Remal, Tal al-Hawa, Sheikh Ejleen, Saraya Junction, and other areas.

The army also carried out more than 50 strikes within just a few minutes targeting the Remal neighborhood, al-Wihda Street, Palestine Stadium, in addition to the western and southern areas of Gaza city.

Many Palestinian families fled their homes to seek Shelter in the Shifa Medical Center which also reported many deaths and dozens of injuries after the army bombed homes in al-Wihda Street and added that many Palestinians are buried under the rubble.

The Israeli army also killed at least two Palestinians and injured three others in an area, east of Jabalia, in northern Gaza.

On Saturday, the army killed Sa’id Abu Ghalyoun, 30, after firing a missile at a car, north of Gaza city.

Furthermore, many warehouses, and storage rooms, were also bombed by Israel in the at-Atatra area, northwest of Beit Lahia, in northern Gaza, after the army fired missiles at them, on Saturday evening.

Most of them contain plastic products, agricultural supplies, and tools, causing an intense and spreading fire in them and surrounding buildings.

26 killed in the bombing of al-Wihda Street in al-Rimal, which is the governmental district of Gaza City

Mohammad Tahhan, 21. He was from the town of Adloun, and died at Marjayoun Governmental Hospital after he was injured by Israeli fire.